“Oh dear Lord, let me be born again in Banavasi, if not as a human then maybe as a honeybee. Let me over the flowery fields surrounding this beautiful land.” – Adikavi Pampa.

The Banavasi village is still a less explored place, the beauty of which has inspired the works of many ancient poets. A belief also persists that Mahakavi Kalidasa was inspired to create ‘Meghdoot’ by the beauty of Banavasi. Dramatically set around the Historic Madhukeshwara Temple, Banavasi looks like a movie set in the land where Varada River flows on both its sides.

The quiet and often misty lanes of Banavasi are flanked by old-styled and yet aesthetically neat houses. The ancient walled fort dating back to the 5th Century now lies in ruins veiled by bushes and trees. The town of Banavasi also finds its traces in the work of Claudius Ptolemy. (the one who created the first world map) Before I go deeper into praising the beauty of this place, let’s see the exact location of Banavasi.

It is located around 387 kilometers northwest of Bangalore in the Karnataka state of India. It can be explored as a part of a day trip from Gokarna, Shimoga, Davangere, Hubli, Talguppa or Jog falls. The nearest popular town is Sirsi. The town of Banavasi falls in Sirsi Taluk which is at a distance of around 23 kilometers. The oldest town in Karnataka is also its most ancient capital. Banavasi is supposed to have been the capital of the King Mayoora Sharma. He was a benevolent emperor of the Kuntala Kingdom of the Kadamba Dynasty. The then kingdom of Kunthala stretched till the islands of Mumbai in the North and Chikkamagaluru in the South. Over the centuries, Banavasi has earned different names for its beauty and changing cultures. As mentioned in the Sanskrit, Prakrit and Kannada inscriptions and scriptures, Banavasi was known as Vanavasika, Kaumudi, Baindivi, and Jayanthi. The elaborated epic of Mahabharata also mentions Banavasi as Sanjayanthipura which was ruled by Sahadeva, a Pandava. The Kuntala Kingdom was a part of the Mahajanapadas, the early forms of democracies in ancient India. The 5th Century BC coins found during the excavation work in Banavasi is one of the oldest found in India.

Banavasi, as I personally felt, is more about exploring its rich nature, fertile lands, and preserved culture. We started our exploration with the famous Madhukeshwara Temple or Banavasi Temple, and so can you. This would apparently be one of the oldest temples of Karnataka having a 2nd Century idol.

The foundation of this Banavasi Temple is supposed to have been laid by King Mayoora Sharma. The architecture of the temple is now a mélange of Sonda, Hoysala, Chalukya, Pallava and Rashtrakuta schools that kept adding the structures until the 12th Century.

The main feature of this temple is that none of the deities are placed without their consorts and their vahana. (animal vehicles). The main mandapa of Madhukeshwara temple shares the compound with Devi Parvati on its right. The other special features of the Banavasi Madhukeshwara Temple include: The Interior of the Main Temple

The entry to this ancient temple compound gives you a feeling of entering some museum of temples and idols. From ornately carved pillars to a simple-most sanctum sanctorum, each part of this temple is a reflection of the style of architecture followed by the kingdoms that ruled Banavasi and worshipped Madhukeshwara Linga. Unknowingly, this temple erases the boundaries between the three main sects of the religion namely Shakti Upasaks, Shaivites and Vaishnavites.

Shravanbelagola – Unravel the Real Story of The Mighty Bahubali

A Temple with a Rahasyam – Secret of Chidambaram

The Deities on the Wall of the Main Shrine Most of the shrines in this temple complex have their walls depicting the scene of the sanctum sanctorum of the Madhukeshwara shrine. That is, a shiva linga faced by a Nandi. On the other hand, the mandapa walls of the main shrine can visually be identified as a late construction. They have an intricately carved out series of different deities venerated in this region. It also includes the dashavtar of Lord Vishnu and certain kinds of Lord Ganesh.

The Temple Courtyard of the Madhukeshwara Temple 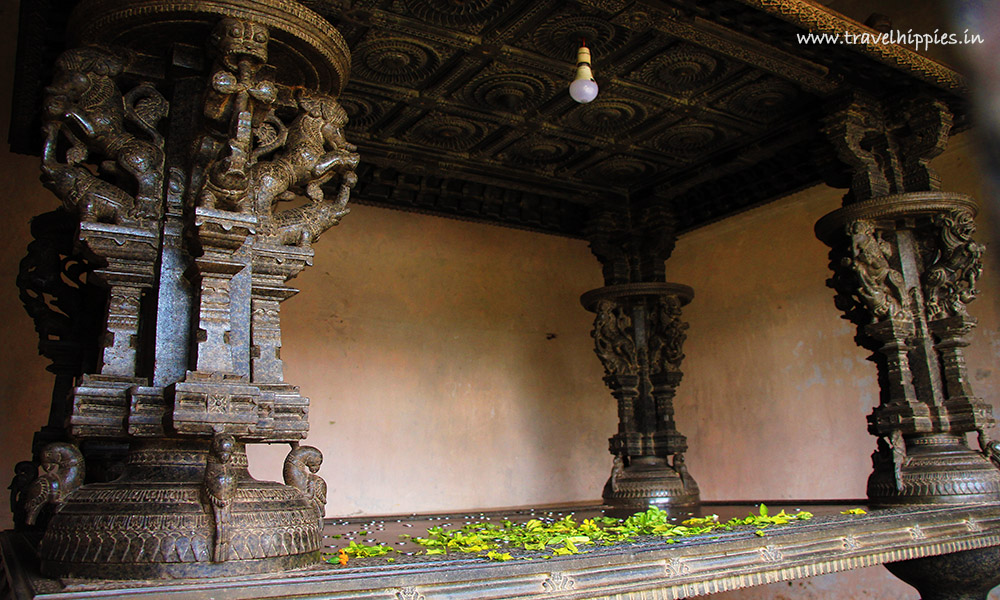 Other Places to Visit in Banavasi

Adikavi Pampa lived and created a few of his best works from this little forest where once existed his hut. His work is considered one of the ‘Three Gems of Kannada Literature’. ‘Pampa, Ponna, Ranna’ are the three celebrated poets of Karnataka who are also called the three gems. This tiny forest is permanently closed for the visitors but you can have its glimpse from outside. At a distance of around 5 kilometers, surrounded by green fields and a view of the Malenadu hills is this sunset point of Banavasi. Sunset, seen from anywhere on the outskirts of Banavasi looks immensely vibrant. However, post-monsoon this lake is a must-visit. Bird lovers may also spot or hear some local birds of the region. Pineapple farms and factories are favorite among the travelers in Banavasi. Sometimes, the local ladies in Banvasi also organize a feast serving different varieties of dishes using pineapple. Tall trees of areca nuts, coconut, and other spices make the interior routes picturesque. One of the most gorgeous roads from Banavasi leads to Siddapur. We had taken a night halt at Siddapur while heading to our next destination, Jog Falls. Initially, we were a bit skeptical about this highway suggested by google as it is a single lane road. Our doubt was soon subdued as we drove on the road in fairly good condition. Throughout our drive, there were scenic farms plowed by bullocks and the dramatic clouds just added to the feel. If you are on a road trip and driving anywhere to or from Jog Falls, you must take this route starting from Pampavana.

The oldest capital of Karnataka is still one of the more preferred options to catch a live performance of Yakshgana. This traditional dance form of Karnataka is vibrant and lively if you can manage to understand Kannada. You may also stumble upon many artisans in the market specialized in making Yakshgana masks.

Read about the must-do things in Udupi and Gokarna here.  things

Where to Stay in Banavasi

Uttara Karnataka Tourism department has built a tourist lodge called Vanvasika. It serves a beautiful view on the outskirts of Banavasi near the Varada River. You can either opt for a night stay here or can head towards Jog Falls and stay at Ibbani Homestay in Siddapur. It is a little cosy home amidst the misty farms of Siddapur and is only a 15km away from Jog Falls.

Are you fascinated by such historic temples? Would you like to visit it on any of your trips? Let me know in the comment below.

Found it useful? Pin it now